Dato’ Sri Ir Chong Ket Pen is the founder of Protasco Group of Companies. He has been a Director of Protasco Berhad since 15 May 2001 and was appointed to the post of Executive Vice Chairman on 20 February 2013. He is also the Group Managing Director of Protasco Group of Companies. Following a BEng (Hons) degree from the University of Malaya in 1979, he obtained his Master of Philosophy (Civil Engineering) degree from the University of Birmingham, United Kingdom in 1990. Dato’ Sri Ir Chong Ket Pen has been a member of the Institute of Engineers Malaysia since 1984 and in the following year became a registered Professional Engineer with the Board of Engineers Malaysia (BEM). He has been admitted as member of the Institution of Civil Engineers, United Kingdom in 1985 and is registered as Chartered Engineer with the United Kingdom’s Engineering Council since 1987. Dato’ Sri Ir. Chong Ket Pen He began his career as Road Design Engineer cum Assistant Project Engineer at the Public Works Department (PWD) Kelantan in 1979 and was promoted to the position of Project Engineer in 1982. He later became Senior Engineer at the Design and Research Branch of the PWD Headquarters. He was assigned as Senior Pavement Research Engineer at Institut Kerjaraya Malaysia (IKRAM) in 1988, subsequently as Senior Engineer, Pavement Evaluation and Research. He is a road pavement specialist, having extensive experience in the design, construction, and maintenance of road pavements. In 1991, he left the public sector to set the foundation for the establishment of Protasco Group of Companies.

He brings with him more than 30 years of corporate experience, starting with corporate banking at the Asian International Merchant Bank Berhad (which is now part of Public Investment Bank) and Utama Wardley Berhad. In 1988, Dato’ Mohd Ibrahim joined The New Straits Times Press Group and held various senior positions in the Circulation Department and the CEO’s Office until 1994.

Dato’ Mohd Ibrahim was Chief Operating Officer of Malakoff Bhd in 1994 and in 1996 became the Group Managing Director of Padiberas Nasional Bhd (BERNAS).  He was also BERNAS’s Vice Chairman from 2001 to 2003.  Between the years 2001 to 2012, Dato’ Mohd Ibrahim held directorships in various organisations. Among others, he was Chairman of Malay Mail Sdn Bhd and Executive Vice Chairman of Sistem Television Malaysia Berhad (TV3). He was a director in BERNAS; the New Straits Times Press (Malaysia) Berhad; Malaysian Resources Corporation Berhad; Kumpulan Ikram Sdn Bhd and Ikram Education Sdn Bhd.

He is also on the Board of Governors of the Infrastructure University Kuala Lumpur. 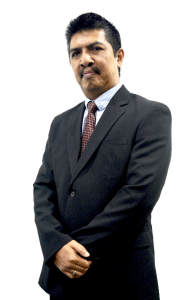 He graduated from the International Islamic University Malaysia in 1995 with Bachelor of Laws (LLB) Hons. He was called to the BAR and was later admitted as an Advocate and Solicitor of the High Court of Malaya in 1996. He was also a licensed Company Secretary from 2000 until 2010 and the Associate Member of the Malaysian Institute of Chartered Secretaries & Administrators from 2000 until 2007. He obtained his license to practice as a Company Secretary from the Companies Commission of Malaysia in 2000.

He began his legal career as an Advocate & Solicitor in a few Kuala Lumpur based legal firms from 1995 until 1998 before joining the corporate world as a corporate legal advisor from 1998 until present. Dato’ Ir Kenny served with Australia Road Research Board (ARRB) as Graduate Engineer before returning to Malaysia in 2005. Since then, he held various positions in Protasco Berhad of Companies. He began his career as Pavement Engineer with Kumpulan Ikram Sdn Bhd from 2005 to 2006. Subsequently, he joined Infrastructure Research & Development Centre as Pavement Engineer and served until December 2009. Widely exposed to various scale of engineering and project development including detailed engineering and construction supervision, he held directorships in Ikram Centre of Excellence for Sustainability & Green Technology and Ikram Master Builder Sdn Bhd before assuming his present position in 2014 as Managing Director of Property & Infrastructure.

In his present position, leading the Property Development Division of Protasco Berhad, Dato’ Ir Kenny
oversees the entire 100-acre development and ensures the growth of De Centrum City, the new township at Kuala Lumpur South and other related development projects. He holds a Bachelor of Engineering (Civil) (Hons) from the University of Melbourne, Australia. He is a Chartered Professional Engineer of Australia (CP Eng).

Ir Edward Khoo joined Protasco Development Sdn Bhd as a Project Director in June 2009 where he was responsible to oversee various projects. Prior to that, he was a Project Engineer with Cardno Grogan Richards in Melbourne, Australia since 2007. He also served Mahajaya Berhad as a Project Manager and Sepakat Setia Perunding as Structural Engineer in 2004 and 2001 respectively.

In his current position as Executive Director, Ir Edward Khoo is responsible for a number of major projects including the De Centrum City Master Plan which has a Gross Development Value (GDV) of RM10 billion. The 100-acre commercial development comprises among others a retail mall, soho and service apartments and a hotel and services suite.

Ir Edward Khoo also oversees the development of 3210 unit apartments under the Perumahan Penjawat Awam Malaysia (PPAM) project in Putrajaya, Malaysia. The PPAM project has a GDV of close to RM1 billion.